You Get Much More Than Lemonade With This Cookbook


The name "The Lemonade Cookbook" might lead one to believe that the cookbook is about making lemonade. If you are not from the Los Angeles/Southern California region, you might actually think this. However, those from the area are probably more familiar with the cafeteria style eatery that features fresh, family-friendly dishes (umm, sound familiar?). Lemonade is described as a modern cafeteria where visitors enjoy a rotating daily spread of deliciousness, offers fresh fare that tastes as though every culture is stirred into the pot.

And that's what you will get with the book. Author Chef Alan Jackson has a style I can relate to as well. Besides being the father of 3 children, he is a successful restaurateur; he has opened 12 locations since the first one in 2007. He saw the need for quick, affordable food that was also healthy. What does a guy like Jackson do? He created a chef-driven approach to dining. 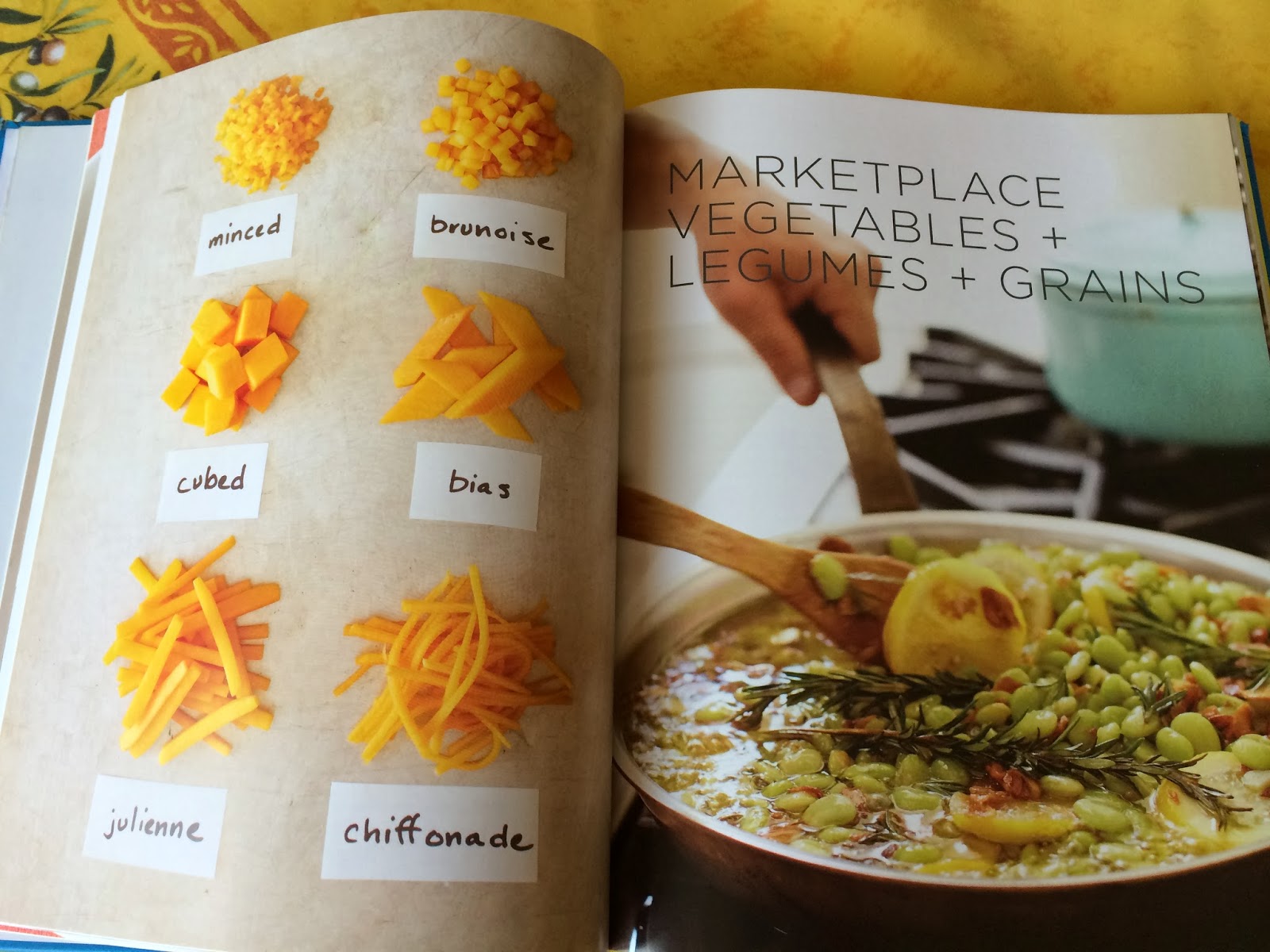 What I like most about the recipes in this book is that I want to make most of them. The photos are vibrant and detailed and the recipes are not too complex. The page below is one of my favorites; just a simple photo of different cuts (although I do have to admit it gave me a flashback to culinary school). Don't be intimidated with something like this; you do not have to be a chef to use this book. 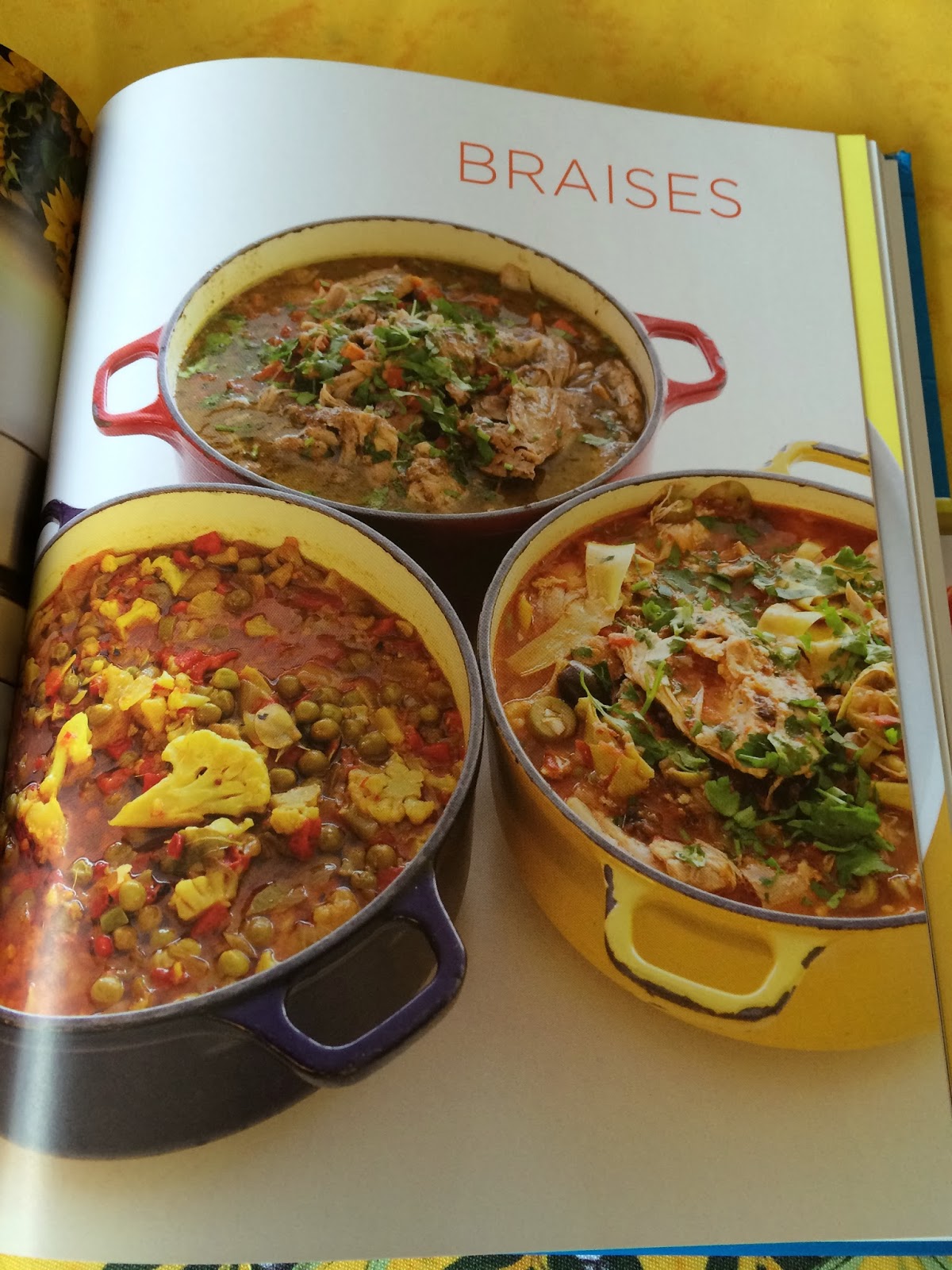 I also like how the book is laid out. When is the last time you saw "braises" as a chapter? You can also find market vegetables, land + sea, soups and stuff, and of course, lemonade (which is harder to type than you would think; I keep typing "lemondade").

Since we eat a gluten and dairy free diet, I wasn't sure whether or not I would be able to use these recipes. After flipping through the book, I quickly realized it would be easy to make substitutions. For example, I used almond milk instead of regular milk and gluten-free breadcrumbs in the buttermilk chicken. For the salad, I used gluten-free tamari for the soy sauce; that was easy. Most recipes can be adapted easily.

So, my recommendation is yes, buy this book if you like to cook. Get ready to be inspired. Feel free to put your own personal spin on the recipes. I don't think Chef Alan will mind.

As you see from the photos above, my versions are pretty darn close, even with my variations. Below are the recipes provided by the Lemonade Cookbook. Thank you for also providing me with a book for this review.  Enjoy!

Amy's Notes: I made my own buttermilk with almond milk and vinegar (add 4 teaspoons vinegar to a 2 cup measure and then fill with milk to the 2 cup mark). However, I think 1 1/2 cups would have been enough. I used less tabasco since my kids are sensitive to spice. I used a gluten-free panko bread crumb. I might not have dried off the chicken breast well enough; it was soggy. However, if it was completely dry, I didn't know how the chicken would stick to the panko. Might have to try it again. I love-love-loved the flavor of the chicken and will definitely do this again.

To prepare the Marinade, in a large mixing bowl whisk the buttermilk, mustard, hot sauce, paprika, salt, onion, and garlic together to combine. Put the chicken in a plastic storage bag, add the buttermilk mixture, and smoosh the chicken around to thoroughly coat in the marinade. Press out the air, seal the bag, and marinate the chicken in the refrigerator for at least 24 hours, preferably up to 2 days.

When ready to cook the chicken, preheat the oven to 400 degrees F. Remove the chicken from the Marinade, wiping off any excess buttermilk, and discard.

Put a cast-iron or ovenproof skillet over medium-high heat. Coat the pan with 2 tablespoons of oil. Once the oil is shimmering, lay the chicken in the pan—you may have to do this in batches. Sear for 3 minutes on each side. Nestle the seared chicken breasts side by side in the skillet. Transfer the skillet (and chicken) to the oven and bake for roughly 20 to 25 minutes or until the chicken is cooked through and the crust is golden.

Amy's Notes: I try to avoid soy beans so I used green beans instead. I did not have black sesame seeds so I used regular. I substituted scallions instead of chives and the shallot. I also added a drop of honey to the marinade as it was tart.

Bring a large pot of well-salted water to a boil over high heat. Prepare an ice bath by filling a large bowl halfway with water and adding a tray of ice cubes.

Blanch the snap peas for only about 2 minutes; they become tender very quickly. Using a slotted spoon, remove the snap peas from the water and plunge into the ice bath to “shock” them, i.e., to stop the cooking process and cool them down right away. This procedure also sets the vibrant green color of the peas. Drain the snap peas in a colander.

Put the blanched snap peas in a mixing bowl. Add the edamame, chives, and vinaigrette, tossing to coat. Sprinkle with the sesame seeds, salt, and pepper, tossing well. Serve chilled.

Amy's Notes: I made half of this recipe and still didn't need it all for the recipe above.

In a small mixing bowl or mason jar, combine the vinegar, sesame seeds, garlic, mustard, soy sauce, canola and sesame oils; season with pepper. Whisk or shake to blend. Keep any left-over vinaigrette covered in the refrigerator for up to 1 week.
Posted by The Family Chef at 5:53 PM No comments: 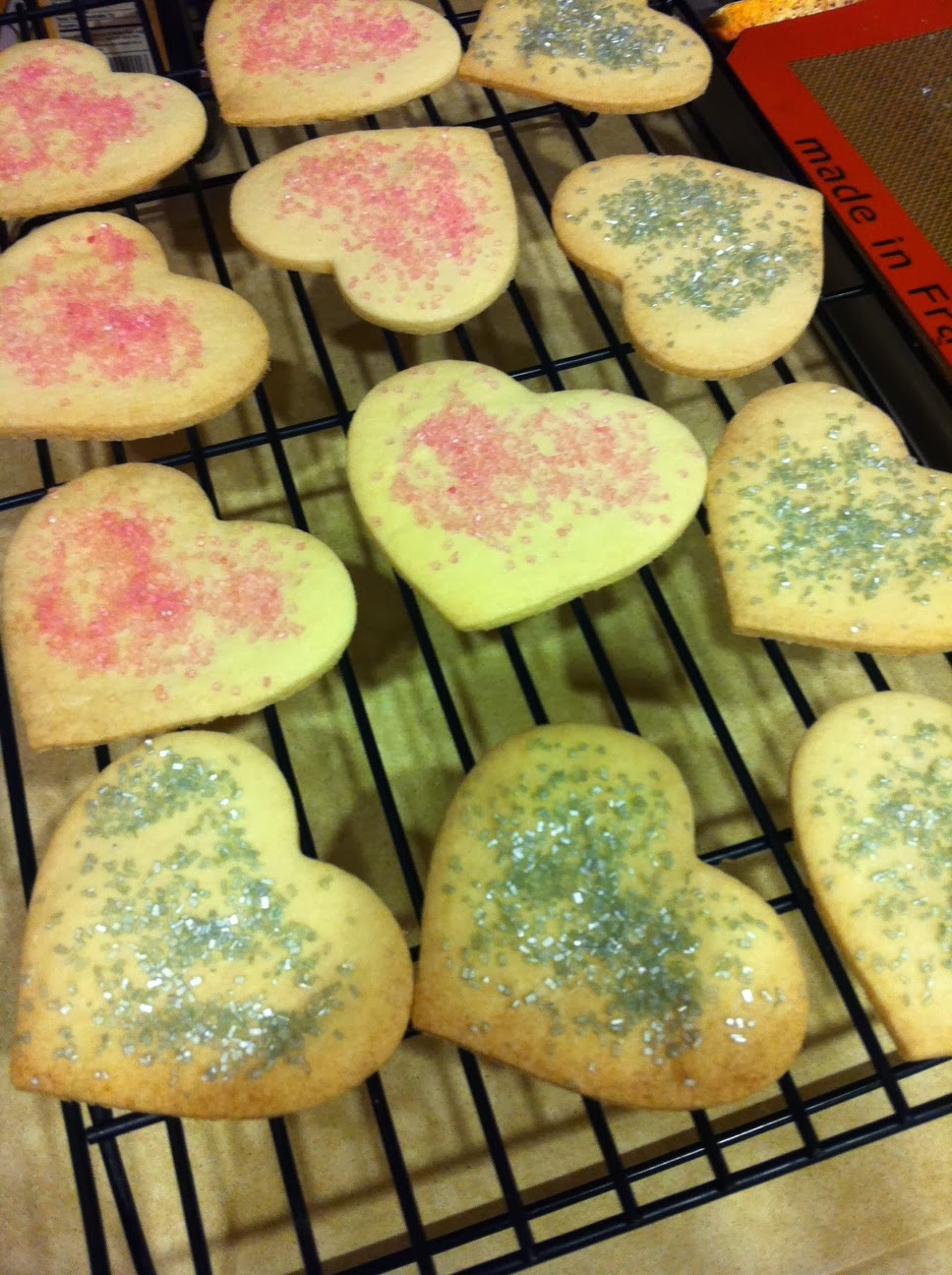 Whether or not you are a kid, a rolled sugar cookie in some fun shape with colored sprinkles always seems fun. Rolled sugar cookies can be made any time during the year. Don't be intimidated when you those fancy looking pre-made cookies in the store; this recipe is easy and delicious (and might even taste better!).

The original recipe came from www.food.com, called “Gluten Free Dutch Sugar Cookies." I’ve made some adjustments to it as well. This is one exception where you need to use the flours listed instead of my mix; it makes it much lighter.

You can find this recipe and more like it in my gluten-free cookbook, The Warm Kitchen.  Here's what one enthusiastic fan wrote about the recipe:


I wanted to report that based on Rebecca's experience, I tried Amy's recipe as well. They were fabulous! The dough was very easy to work with and did not stick to the work surface or crack. The cookies when baked did not crumble or break. My kids like to frost the cookies with a simple icing of powdered sugar, water, and vanilla and the sprinkle with colored sugars. The cookies did not break when the kids did their decorating. But, best of all, the cookies taste wonderful! My husband couldn't even tell that they are GF! Amy, I am a fan!

Yield 3-4 dozen, depending upon the size of the cookie cutter

1/2 cup unsalted butter (use all shortening for dairy-free) 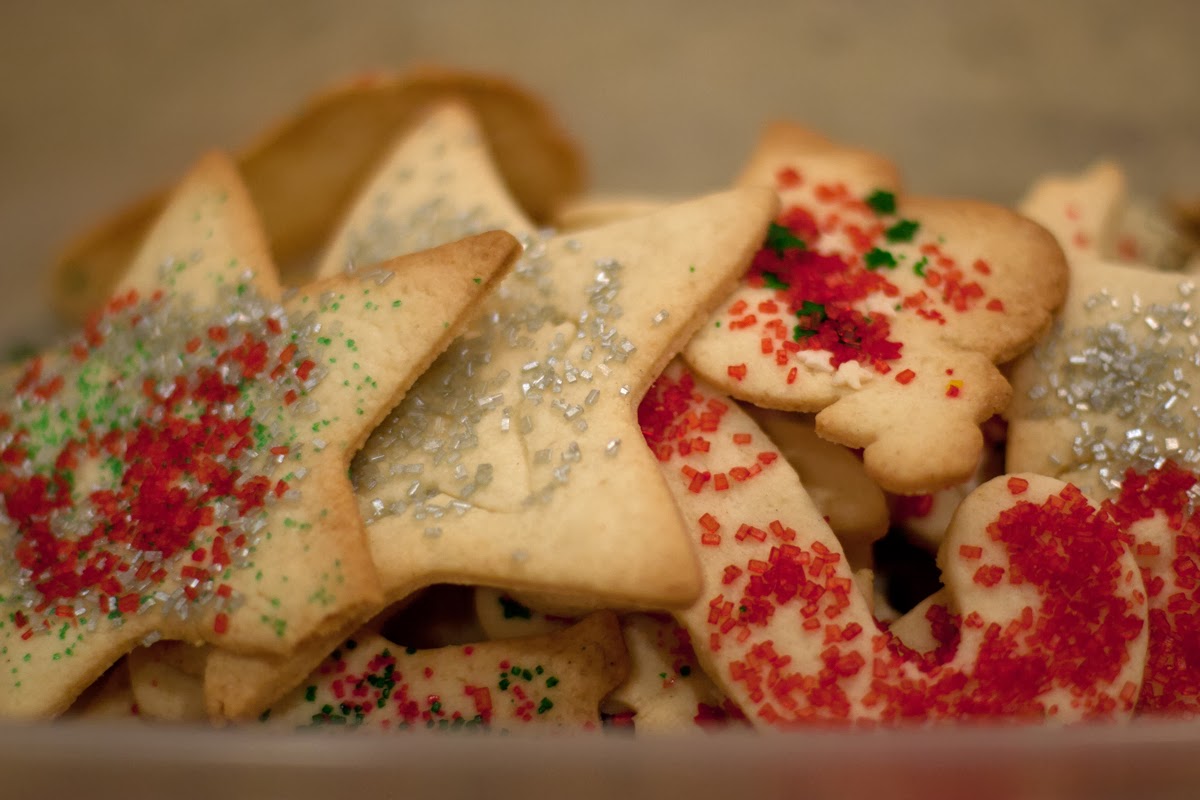 2. In a small bowl, mix together dry ingredients (first 6 ingredients).

3. In the bowl of a stand mixer fitted with the paddle attachment, cream together sugar, butter and shortening. Add the egg and vanilla and mix briefly. Add the dry ingredients, and mix to combine.

4. Take the bowl out of the mixer. Add 1/4 cup of the potato starch and mix with your hands until it is well combined and not too sticky. Add more if necessary and use the rest for rolling. If the dough seems very sticky, place in the fridge for 10 minutes.

6. Using cookie cutters, cut into shapes and place on pan. Optionally, decorate with sprinkles before baking.

7. Re-use the scraps and roll out again, but try not to handle too much.

8. Bake for about 8-10 minutes, rotating once. Cool for at least 3 minutes before removing from the pan.  Cool on wire racks.
Posted by Family Chef Blog at 5:47 PM No comments: 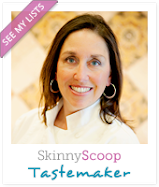